During the growing seasons of 2009 and 2010, same tomato fields throughout Marvdasht  were visited  and  96 isolates of Fusarium spp. were collected from root, crown and stem of diseased tomato plants. Isolates were identified as based on morphological characteristics. They were divided into four species namely: Fusarium solani, F. pseudoanthophilum, F. oxysporum and F. equiseti. These species, being highly pathogenic to tomato, accounted for 47.9%, 18.7%, 22.9% and 10.4% of the isolates, respectively. Of these species, F. solani and F. pseudoanthophilum are the first time reports of on the disase tomato  from Iran. The most frequently encountered species were F. solani and F. oxysporum with 46 and 22 isolates, respectively. Pathogenicity test was conducted for all the species of Fusarium on tomato seedlings by the methods of root dip and soil inoculation and as based upon completely randomized design. Data were analyzed through SAS and mean comparison  done through LSD test. Results indicated that all the species of Fusarium except F. pseudoanthophilum caused wilt, chlorosis and root rot in tomato host plants. The results indicated  isolates of Fusarium spp. To be significantly different in the disease severity at 1% probability. Host range study with F. oxysporum revealed that the pathogen caused wilt and chlorosis only on tomato and was identified as F. oxysporum f. sp. lycopersici. Thid was while, F. solani caused root rot in tomato, chickpea, Arachis hypogea  and Amaranthus retroflexus.

Species Diversity of the Genus Larinus (Col.: Curculionidae) on the Host Plants Asteraceae in Kerman Region 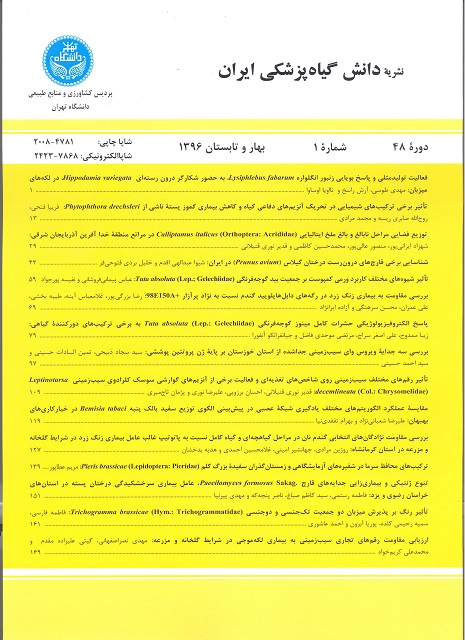